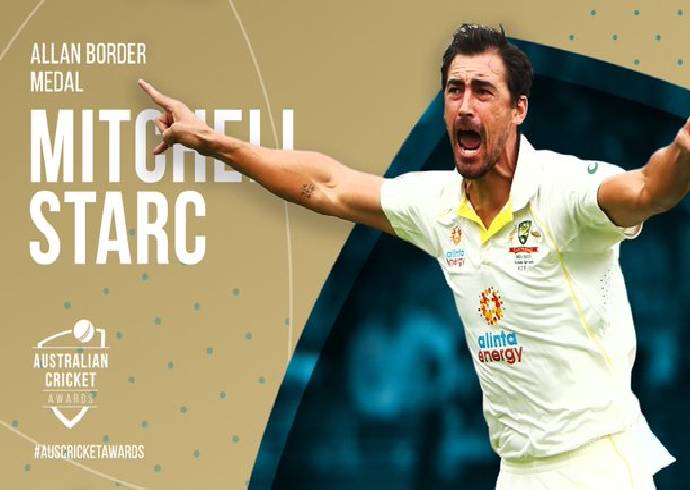 Mitch was honoured for his strong performance in all three formats of the game – he took 43 wickets in the 12-month period which included him playing a key role in Australia’s 4-0 Ashes triumph and also at the 2021 T20 World Cup.

The AB Medal was voted on by by peers, umpires and the media.

Mitch is only the fifth bowler in 22 years to win the award.

He joins Pat Cummins, Mitchell Johnson, Brett Lee and Glenn McGrath as the only fast bowlers to win the top award since its inception in 2000.

Mitch bounced back to his best in the Test arena this summer when he took a wicket with the very first ball of the Ashes series, bowling Rory Burns in what has now become an iconic Ashes moment. He went on to deliver 19 wickets at 25.36 for the series, bettered only by Pat Cummins’ haul of 21.

It was double celebration for Mitch as he also won the men’s ODI player of the year award for his display against the West Indies in mid-2021, taking 11 wickets at 10.6 in the three-game series.

He and wife Alyssa Healy are now Australia’s newly crowned king and queen of one-day cricket, both winning the respective ODI awards.