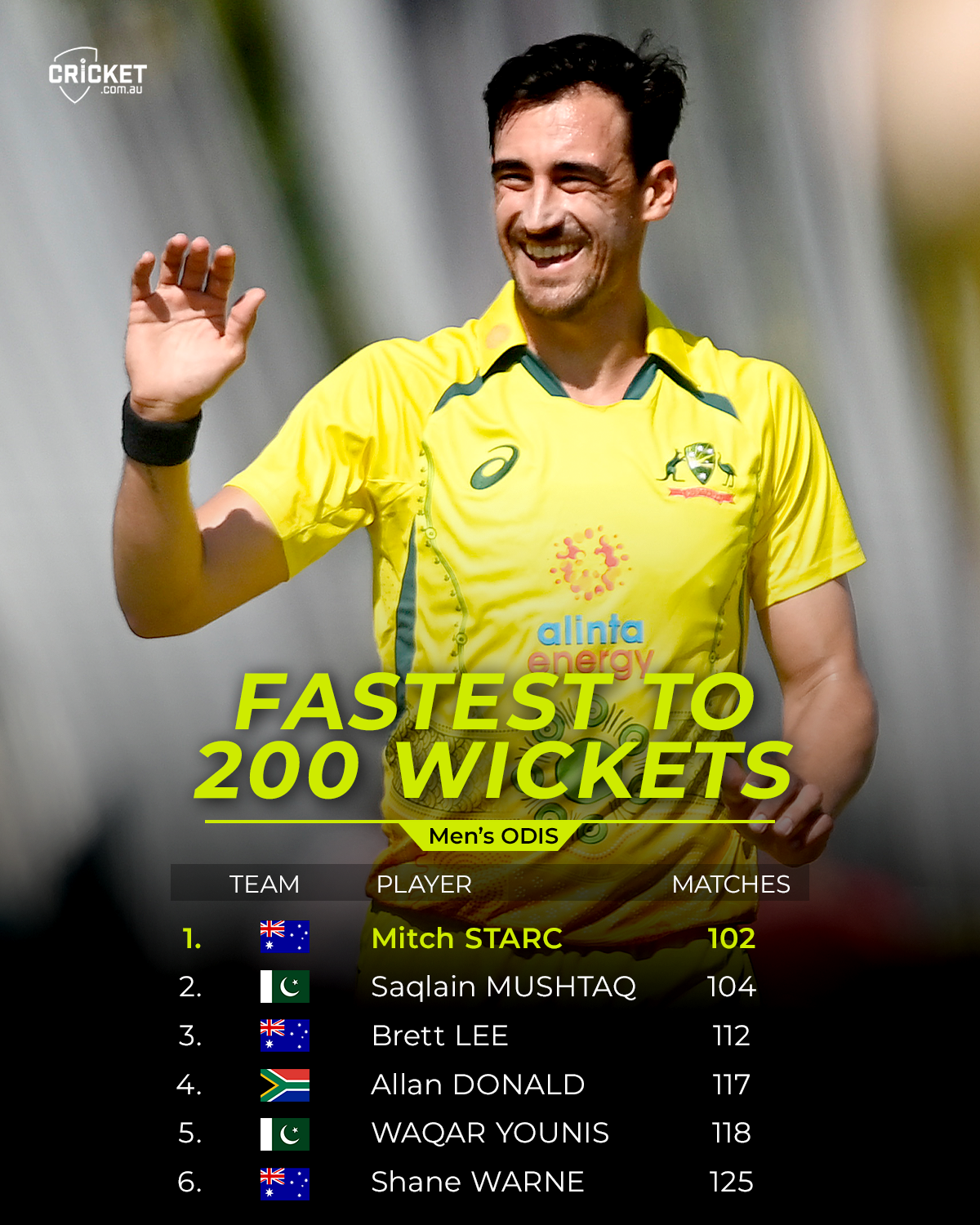 In his 102nd ODI on Saturday in Townsville, Mitch dismissed Ryan Burl when he spooned at catch to Cameron Green at mid-off to reach 200 scalps in two fewer matches than the Pakistani great (104).

The 32-year-old’s latest feat only adds to the case for him to be considered the greatest white-ball bowler Australia has ever had, reaching the double-century in fewer matches than Brett Lee (who took 112 ODIs), Shane Warne (125), Mitchell Johnson (129) and Glenn McGrath (133).

Of those Australians, only McGrath (22.02) has a better ODI bowling average than Mitch (22.30 after the wicket of Burl) while none have a better strike-rate than his 26.20.

The left-arm quick has spent over 12 months stuck in the 190s such is the lack of ODI cricket he has played of late. After putting himself within five wickets of 200 with a dominant 11-wicket ODI campaign against the West Indies in July 2021, he looked set to steam past the figure against Sri Lanka in June this year.

However a freak injury, in which Mitch sliced the tip of his left index finger on his bowling spikes in the preceding T20 campaign, meant he did not play a single match of the five-game series.

In an interview with cricket.com.au just prior to that series, Starc was reminded of how close he was to the record and explained that prior experience has taught him he was better off not knowing.

On individual honours, he remained philosophical.

“It’s always something that’s nice to look back on when you’re done. I’d like to think that I’ve probably got a few more wickets left in me hopefully.”

“I’ve never been about the personal stuff. It’d certainly be probably something to reflect on after cricket.”

Mitch has said that one-day cricket was where he first felt at home at the highest level. He made his international debut in the 50-over format back in 2010.

The longer white-ball format perfectly suits Mitch’s unique blend of fast, full in-swingers with the new ball and ability to shift the older ball the other way at the death, particularly from around the wicket to right-handers.

He was integral to Australia’s 2015 home World Cup triumph, where two of his most memorable career performances came; his stunning six-wicket haul in a tense defeat at Eden Park and then his famous opening-over wicket of Brendon McCullum in the final at the MCG.

He then broke McGrath’s record for the most wickets at a men’s World Cup when he took 27 scalps at the 2019 tournament, leading the Aussies to a semi-final berth.

“It certainly started out as my best format,” Mitch said.

“It’s obviously where I first got a chance in the Australian group and then probably grew from there with a few more responsibilities over the first period of my white ball career, bowling at the death and then obviously the World Cups in recent times. So it was probably my most consistent format for a long time.”

Mitch has now taken 287 Test wickets and with 5 home Test Matches v West Indies (2) and South Africa (3) this summer, he looks set to join the magic 30 Test Wicket Club and add another incredible milestone to his career stats.